The evening before leaving for Barcelona,
we got an email that the galery was broke
and had closed down.

No time to change plans,
so we left to make the best of it.

OK, I was angry that someone
didn't keep his word and squeezed out of it. 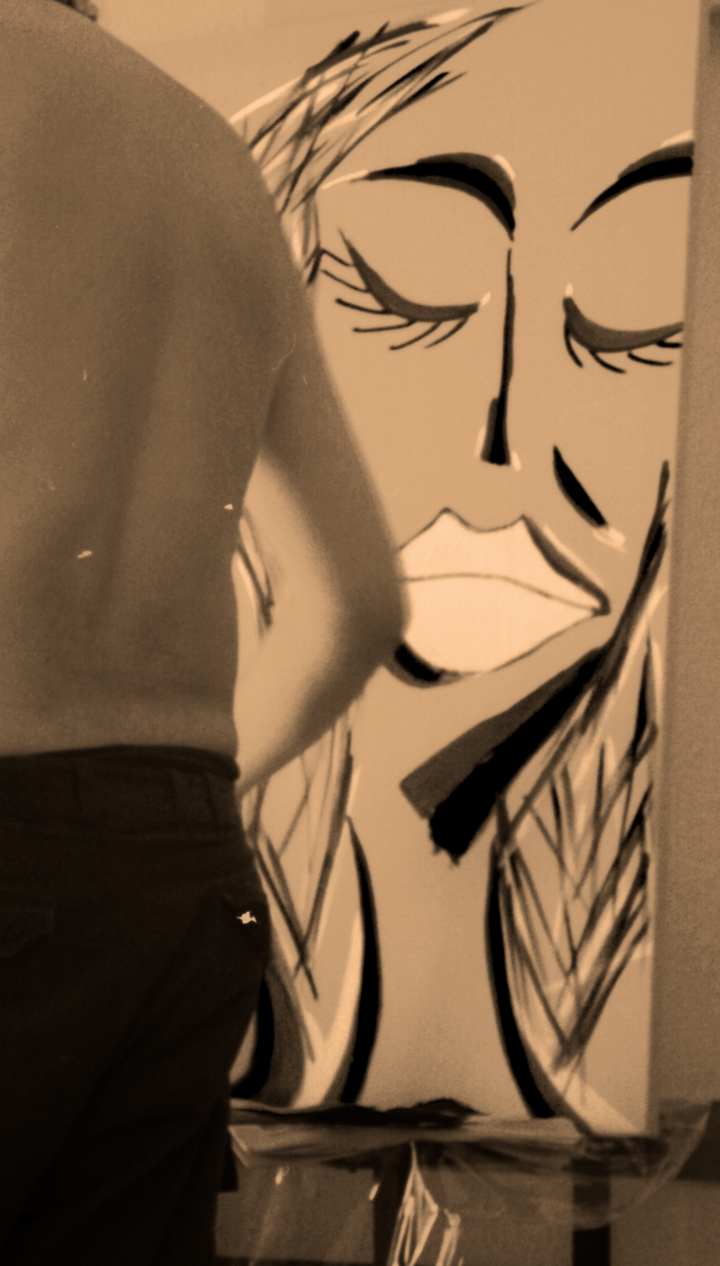 During the first visit I had made two sketches of girls.
Actually more larger than life women.
And as I had now lost the former paintings
and as I had wanted to make the paintings again,
because of the fact that the sketches were different,
had some kind of a different expression,
I made the same themes again. 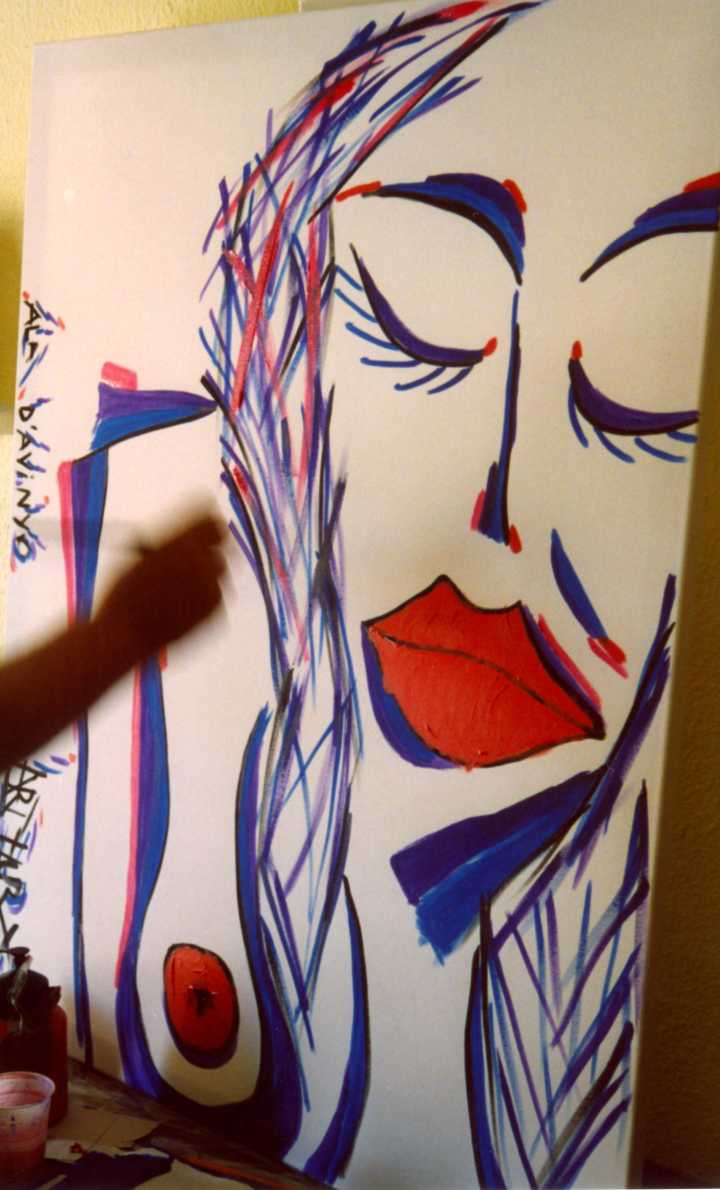 This one I made as the last in the second week.
It's "Ala d'Avinyo".
the first time I got the name right,
but then the wife of the galerist said:
"Ala no it can't be, it will have been Anna."

When we met Ala she said:
"What a horrible mistake I'm not an Anna." 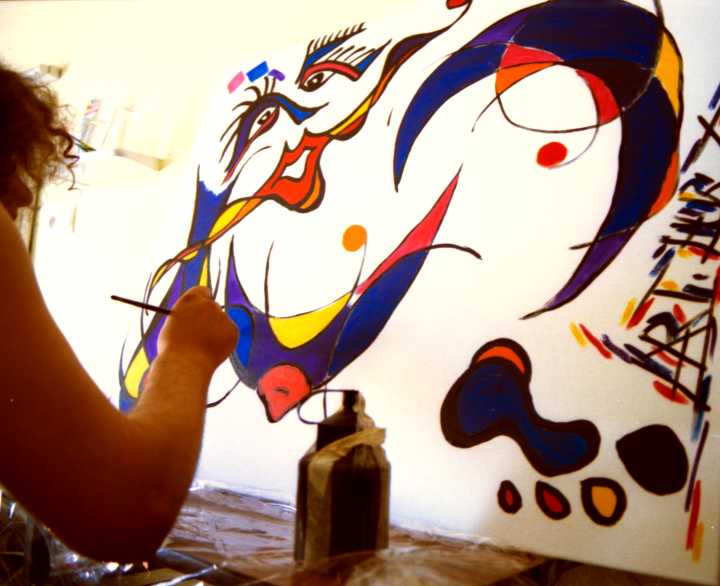 Here is "Fatty Catty".
Working on my knees to get some details.
It should be something along the lines of HushHushWomanCat.
But it turned out to be something completely different.
Starting form a different sketch.

She looks a bit like the girl that was/is singing the backing vocals.
The best moment is when she is sitting at her couch surrounded
and overcrowded with dozens of snorring black cats.

A content smile slowly rolling over her face.
Tiptoeing with her feet in the air.
Contentissimmo, Life can be great. 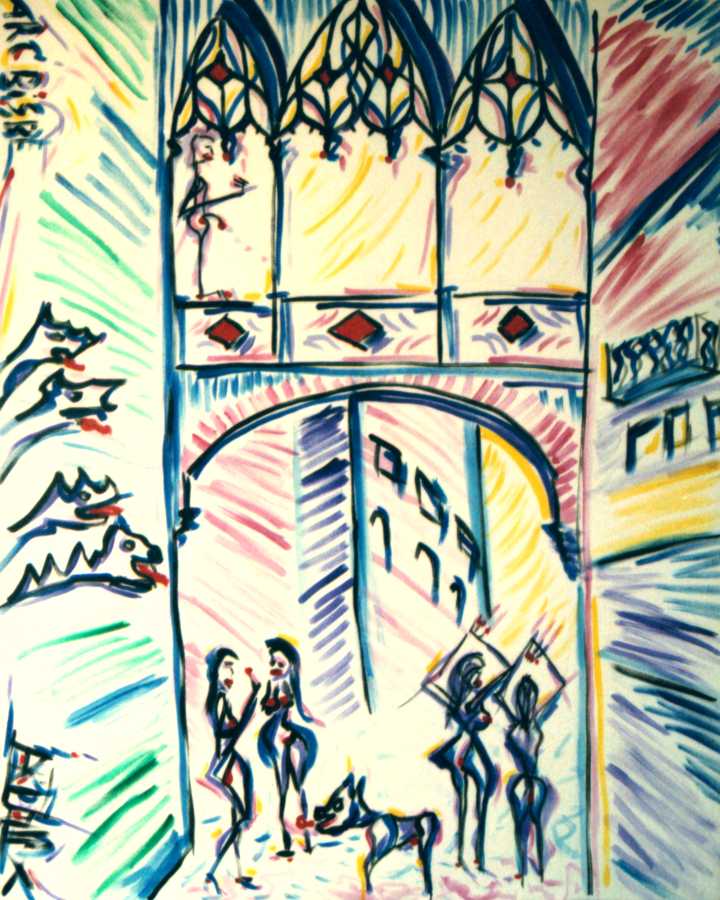 This is the Arc Bisbe.
It is in the old Gothic quarter.
Build during the 1920ties.
It was one big gothic revival.

Ala told us that the facists used to murder their opponents their.

The painting is more frivole.
I made the sketch outside on the place de st Jaume.
Then Kelly said:
"Don't you see the people,
Ohh, please a building with people."
And Sam said in the hotelroom:
"I want a dog."
So I painted a dog.
Then he added:
"He sticks out his tongue."

So the painting is a real collaboration.
People yelling from all sides.

The end result looks to me like the stage of a theater play.
The women and the dog being the actors.
I'm almost sure it's an play by Sartre or Ionesco 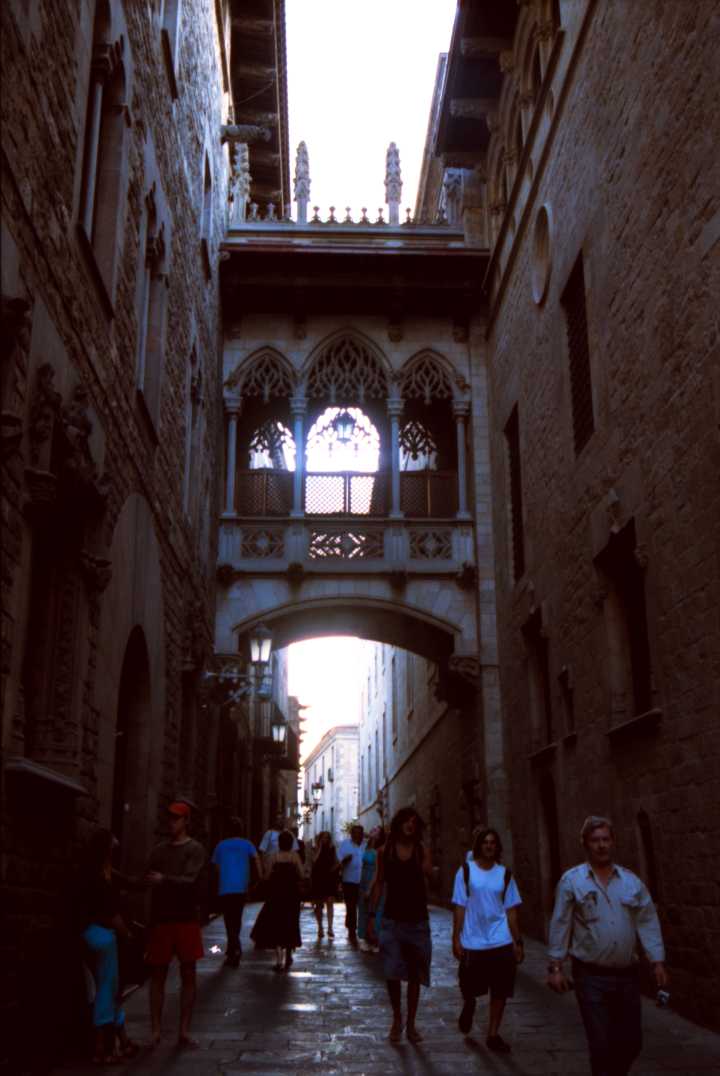 This is the photo, quite dark. 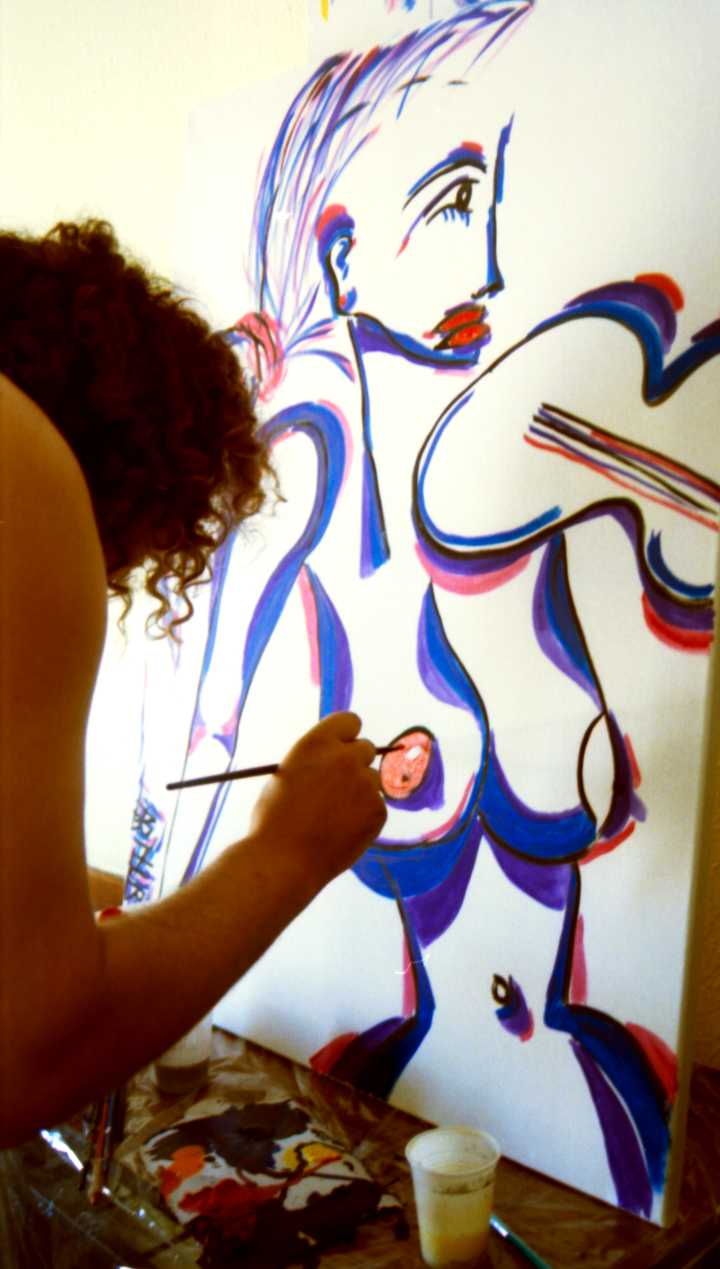 In the hostelroom painting "Violiste de l'Eclise de la Mercť".
You see what moment she picks to make this photo?
I have never done bodypainting,
but can imagine when all the flashes will go off.

This is also from a sketch and the look of the eyes is better now.
More focussed. 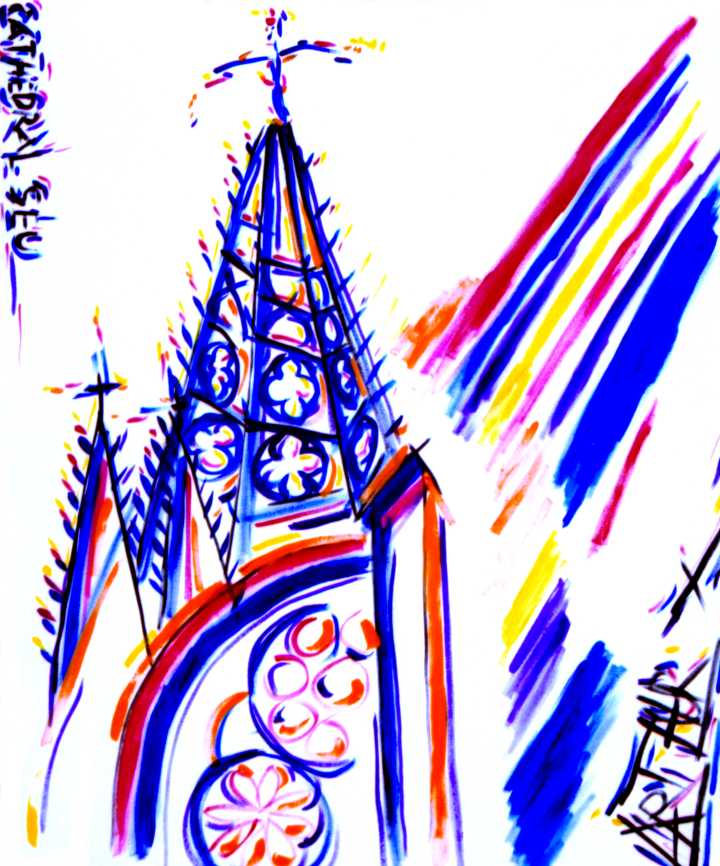 A friend of mine once told me
(Was it a friend? I have lost his adress; moved to Swiss)
"Your roots are the black."

This is the gothic cathedral again.
Not the Gaudi thing.
I went to the Gaudi Cath at the first visit.
It failed to raise any feelings.
But I had been warned before hand by a friend architect.

I painted this from the same spot as during the first visit.
In the narrow alley the high rising spire makes even a deeper impression. 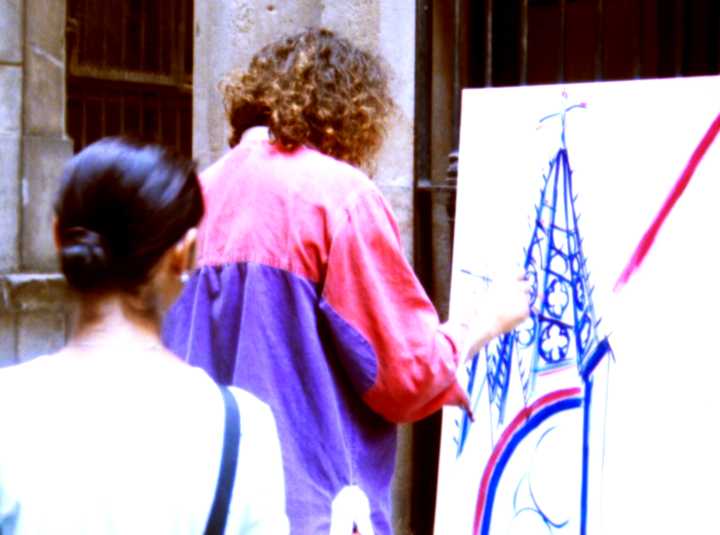 I had an audience without noticing it.
I'm not real a sales person.
Someone I spoke lately explained to me:
You can't be a good salesman and a good maker. 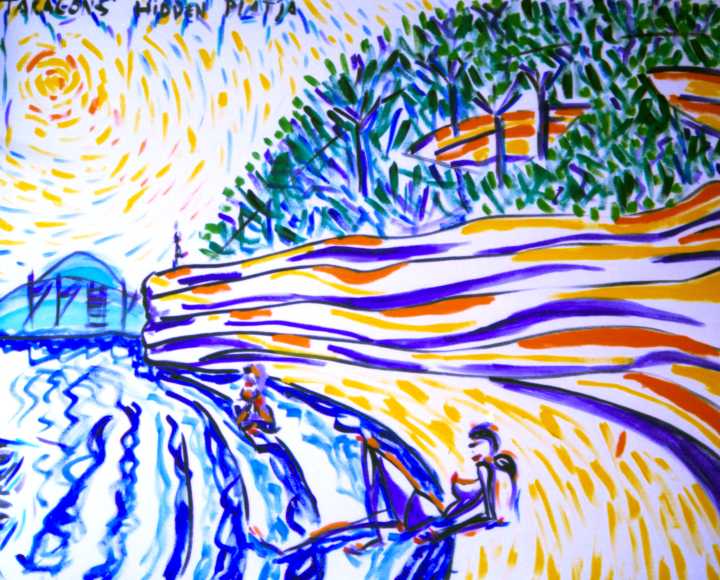 After one week in Barcelona we went to the beach.
It's a long beach in Taragona.
First we camped three meters from the railway.
That's an ear-deafening sound.
Sam while asleep shook.
So the next night we went to a place at the beach front.
No privacy but the calming sound of the waves.

If one walked further north from the beach where all campsites were,
one reached a rock that grew into a cliff.
And by climbing that cliff and passing the cape and enjoying the wide views
over water, sea and land
passing under the pine trees moved by the midday wind
and over bare rock licked by the highest waves,
we came to that other beach.
Secluded, finding a path winding down the overhanging walls.
Remote, hot enclosed, burning sun, silent, no signs of civilication.


It proved to be the local nudist beach.
Forbidden, every moment you could expect Louis de Funais and
Les Gendarmes de St Tropťz to jump out of the trees and arrest you.

If this painting should portait anything,
It should be the enclosedness, the heat and the girls far away. 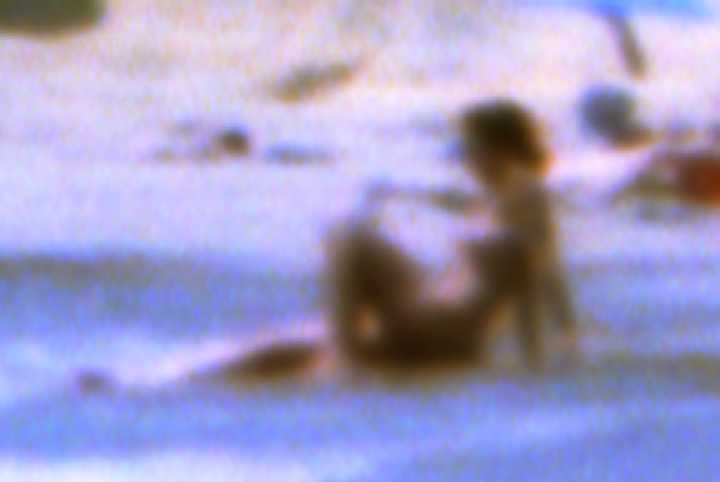 The upper photo is a close up of the girl far away.
In reality I could not see much more than this vague shadows.
And it really looks like that. 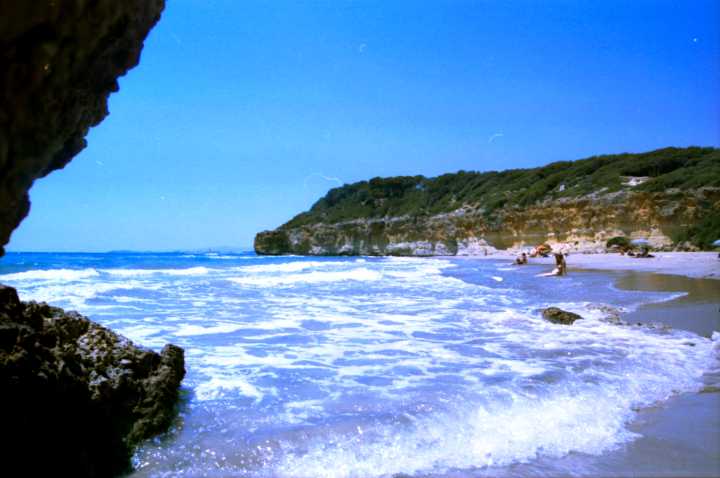 The photo of the bay doesn't show the immense cliffs at the righthand side. 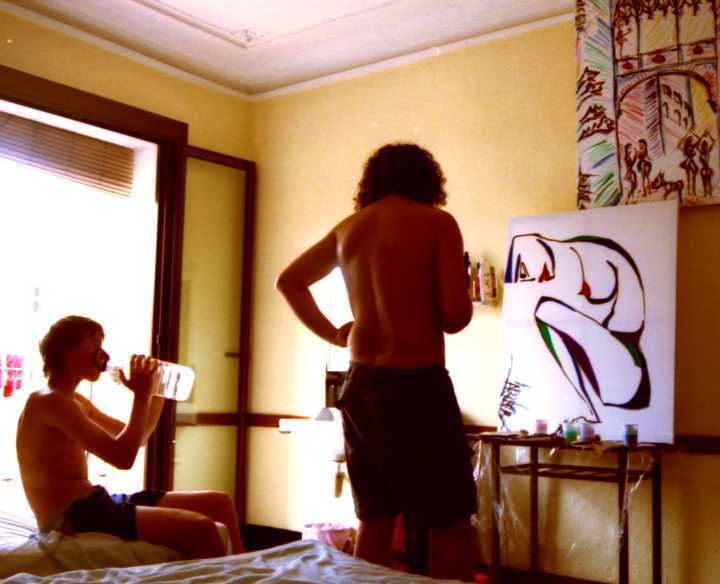 Sam takes a sip.
I have a break to think out the next brush stroke. 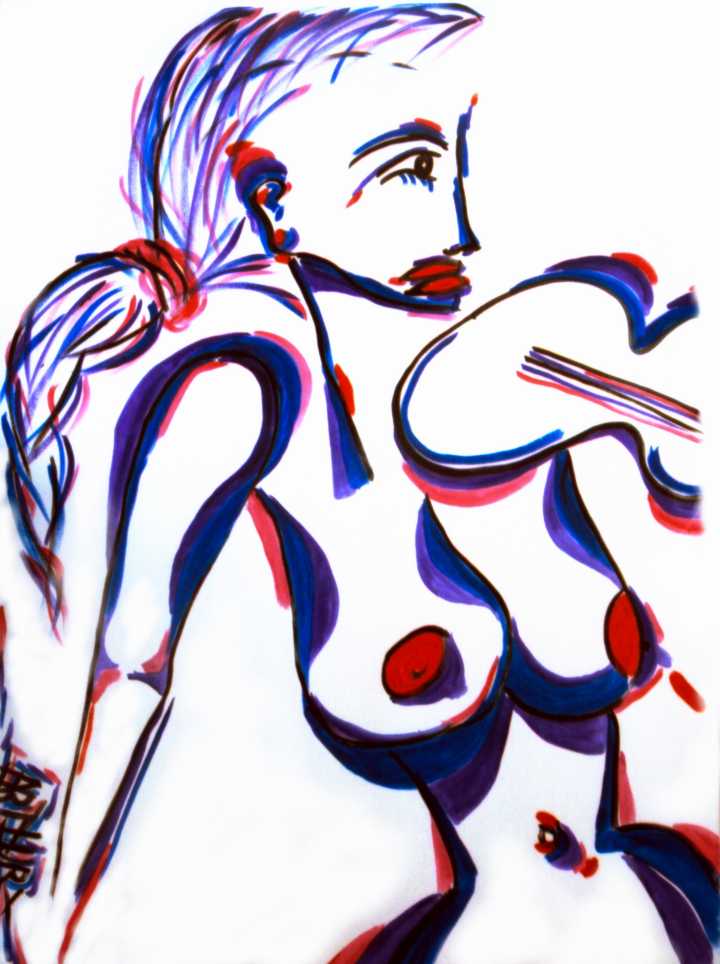 She is finished (the painting).
She looks to the director for a sign to start.
Attention! 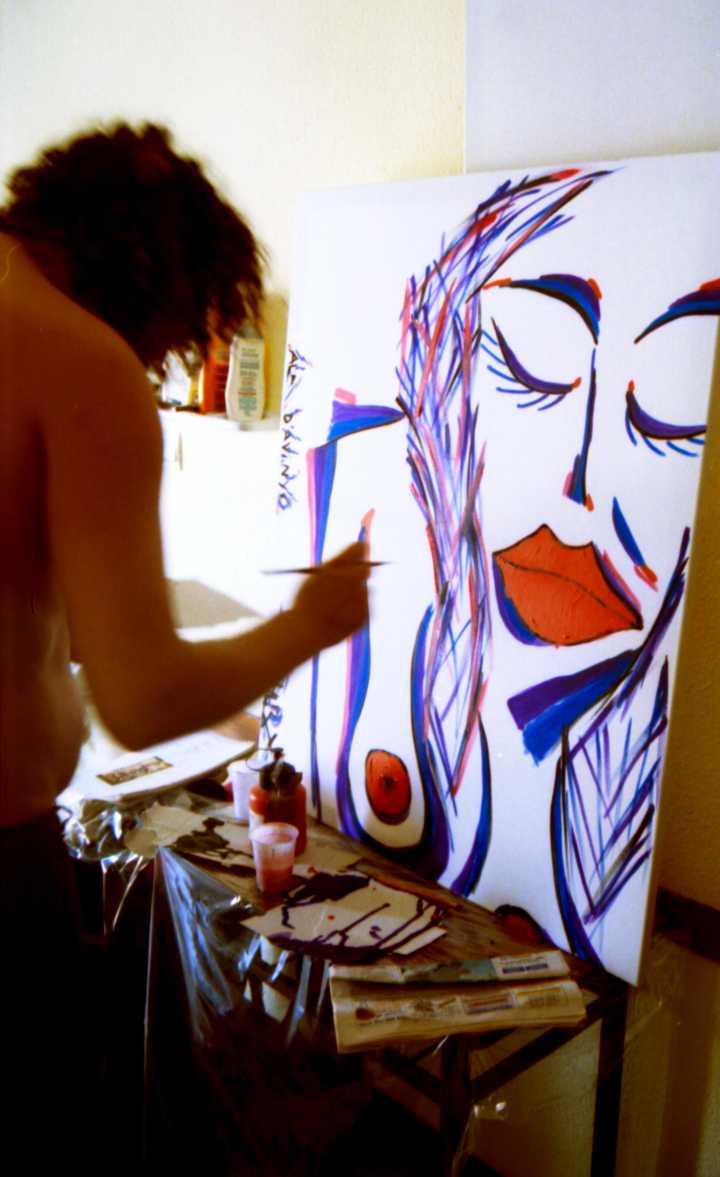 Ala gets more color. 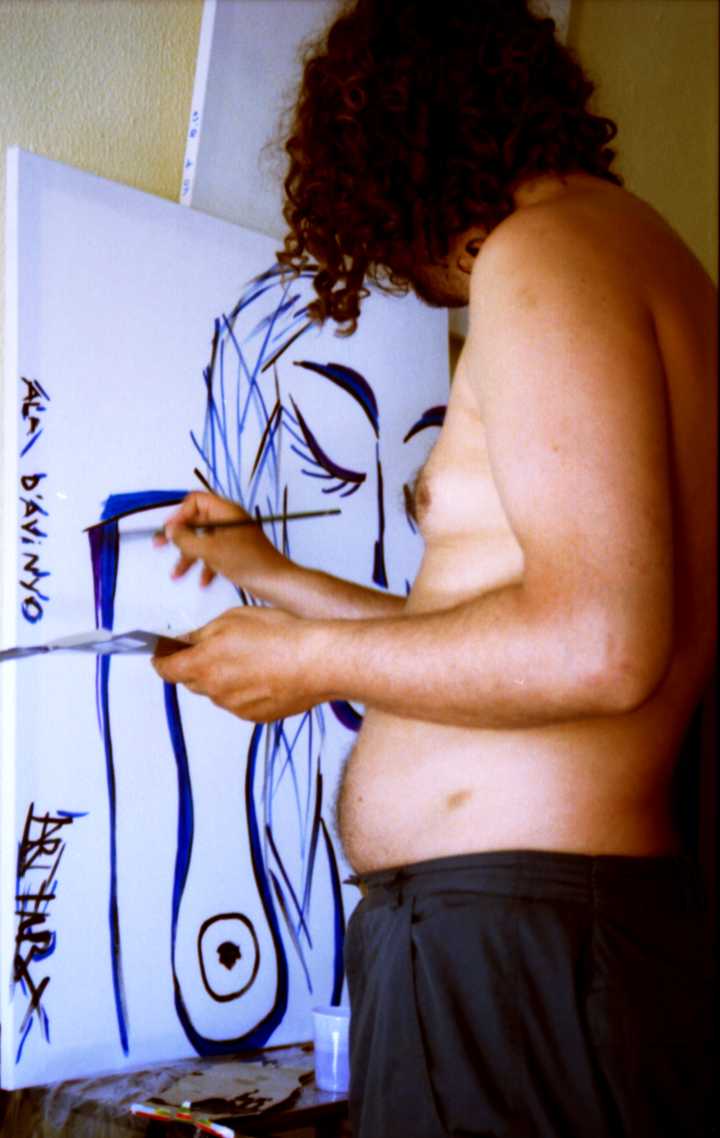 Putting on some more blue.
Yes, I'm a bit a fatty cat too. 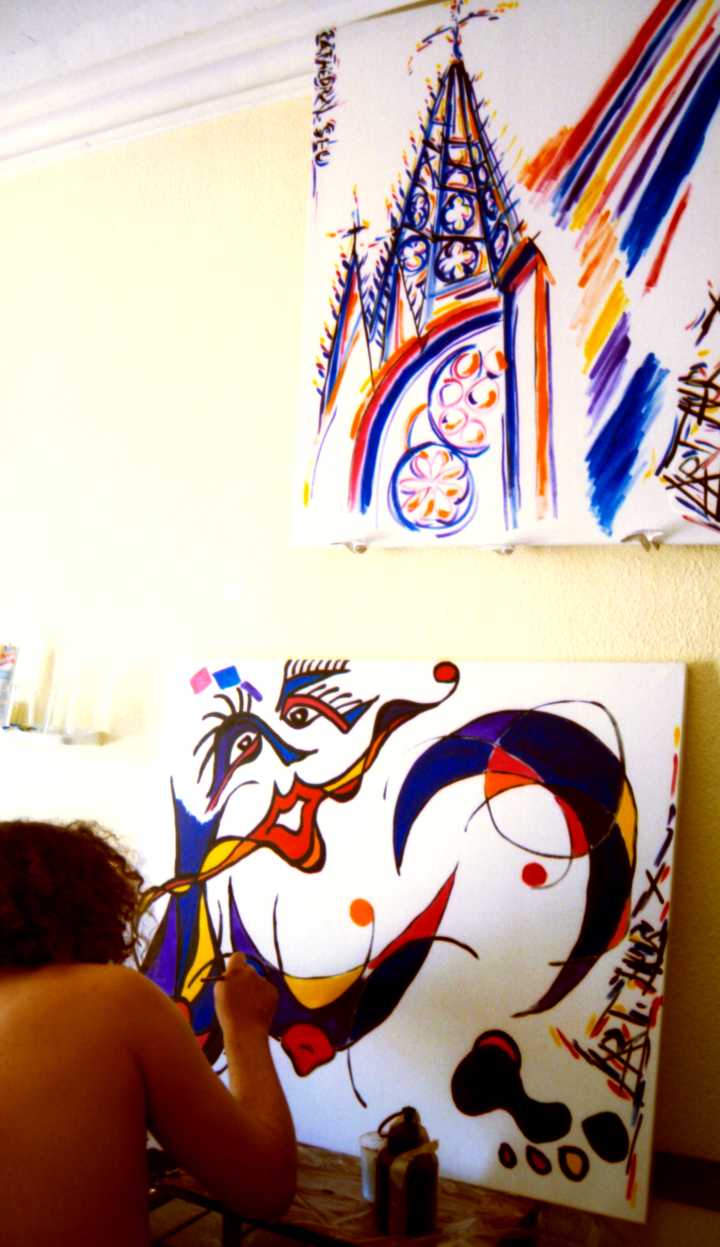 Fatty Catty in the making. 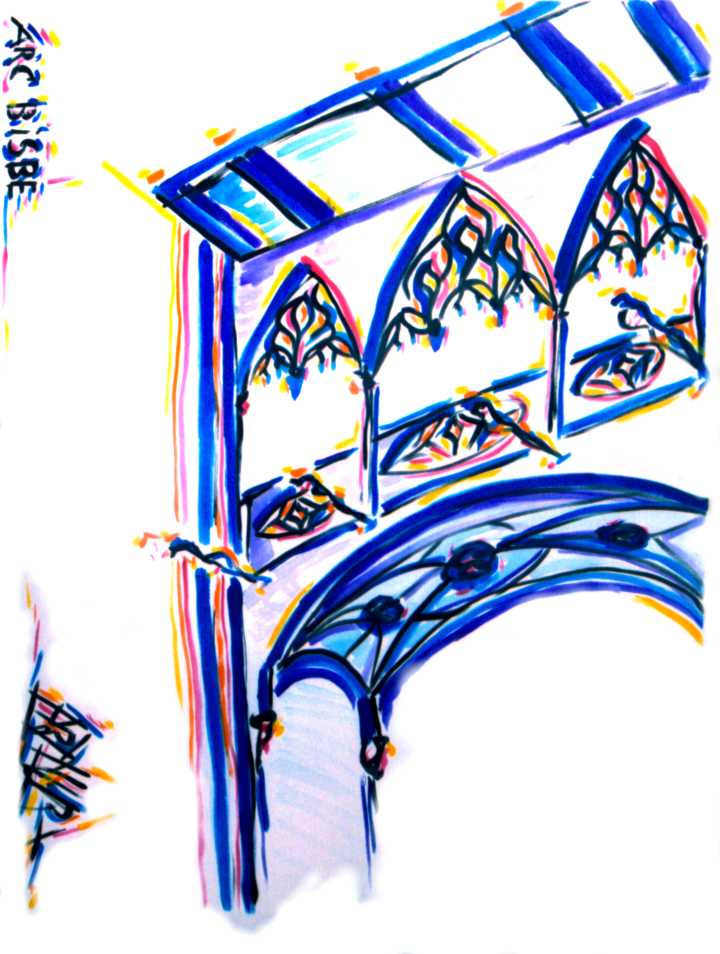 This is the Arc Bisbe again.
The first try is diagonal from under.
I like the perspective.
It's threatening imposing.

All kind of people walk under it.
Just moving from A to B in the daily shopping frency,
without knowing or feeling what hangs above their heads.


This was around the corner of the gallery. The Catalan president sleeps left or right.
Why do they all say, that the president always sleeps?
Is that the politician way of doing business? Unguilty of any wrongdoing, because of a perpetual sleep?


Maybe one day president Baby Bush will wake up out of his perpetual sleep and discover that the war in Iraq was one of the deathliest mistakes out of the US history.

He is also the living evidence that being drunk causes permant brain damage to the whole country. 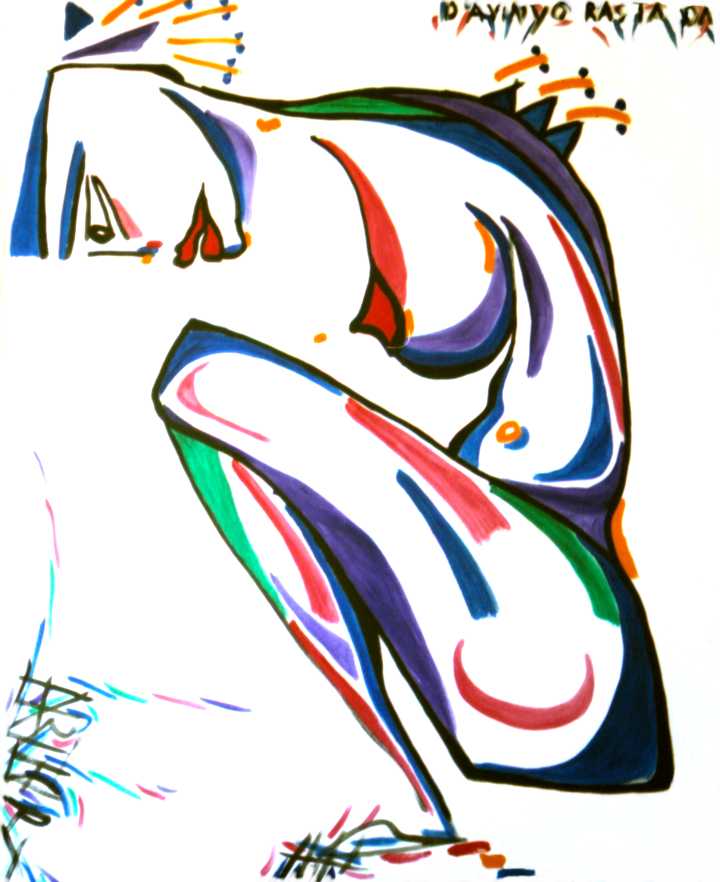 d'Avinyo Rasta Dance
Ala worked first in the Bio-Eco shop at Calle d'Avinyo
now it was a rasta girl. 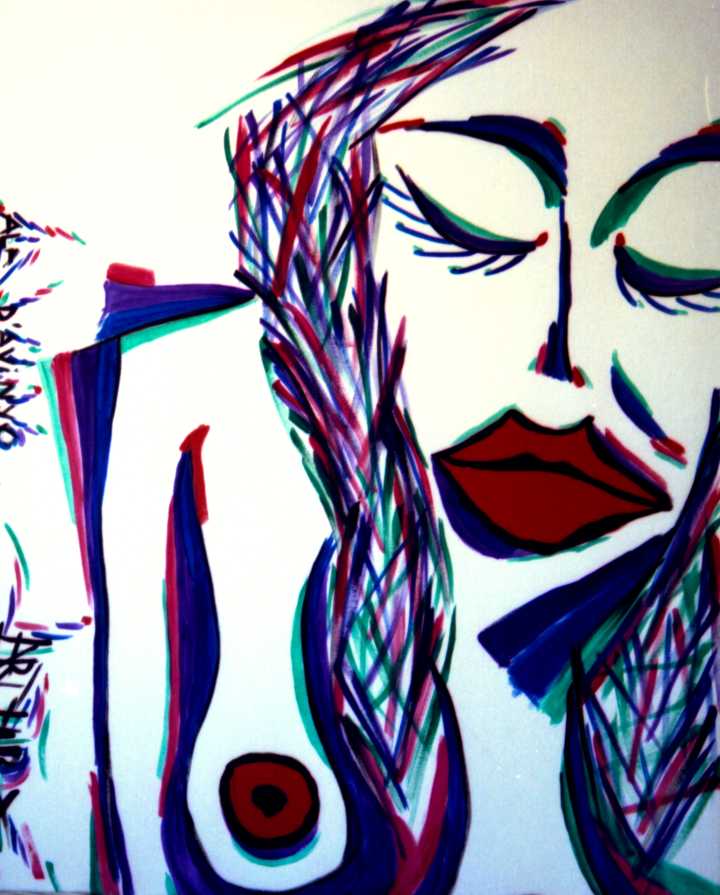 She has closed her eyes.
It's a bit a crossover between Ala and Elizabeth. 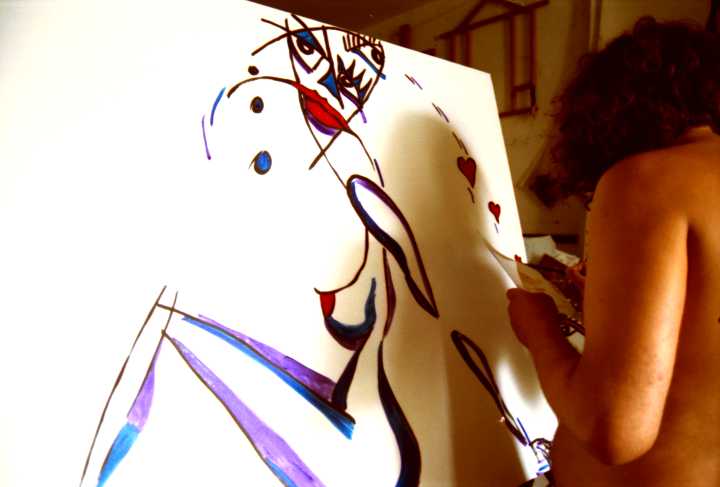 I made this painting at home.
The sketch is from Paris in the 3rd arrondissement.
A small park, that's the whole day filled with people,
and it was May so you was aloud to go on one side of the grassy pelouse. 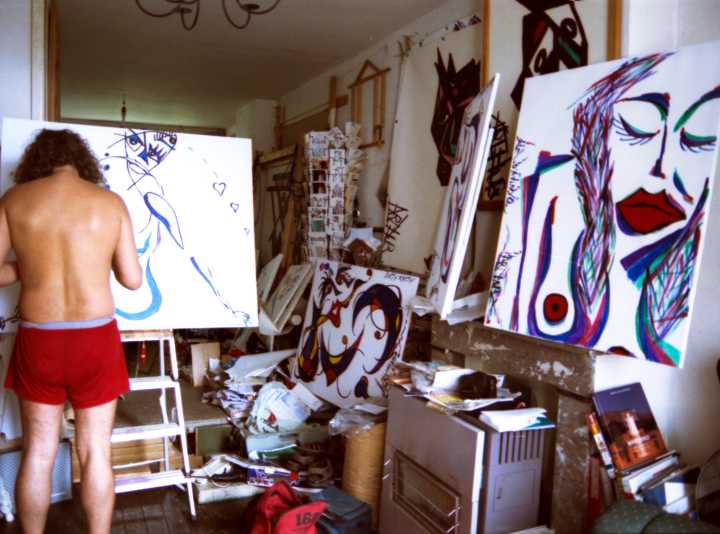 The atelier a mess all around. 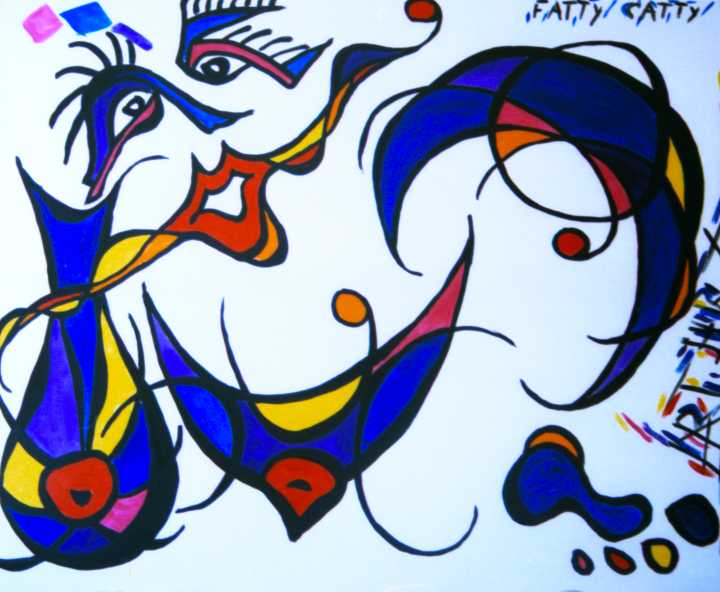